Warning: count(): Parameter must be an array or an object that implements Countable in /storage/content/74/103474/syria.nur.nu/public_html/wp/wp-includes/post-template.php on line 259 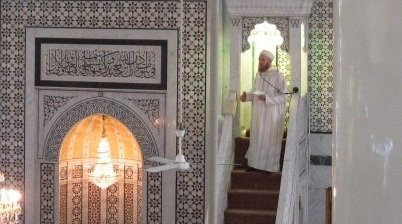 All praise is for Allah. May prayers and salutations be upon our master Muhammad; the best of Allah’s creation, upon his family, companions and whoever is associated with him.

Proclaiming the takbir ‘Allahu Akbar’ [Allah is the Greatest] loudly during war is proven from prophetic practices, peace and blessing upon him, as narrated in Sahih Al-Bukhari and other works. During the battle of Khaybar, he, peace be upon him, said the following:

‘Allah is the Greatest [three times] and Khaybar is ruined for when we approach a nation [the enemy] then miserable is the morning for the warned ones,’ [Sahih al-Bukhari, 52:195, 52:234].

Al-Bukhari entitled the chapter of this hadith as ‘Chapter of Making Takbir during War,’ and the Imam, Ibn Hajar Al-Asqalani commented on this chapter heading in Fath Al-Bari saying ‘i.e. [chapter of] its’ [making Takbir loudly] permissibility and religious stipulation.’

Ibn Habib, one of the Malikite scholars, states that making of the takbir loudly by an army, after morning prayers and night prayers, is an old practice which has expired.

To be occupied in the proclamation of Allah’s greatness, in the masjid, is better than shouting, arguing and engaging in worldly talk; especially during these difficult times. For the takbir is a form of remembering Allah Almighty and it has many wisdoms and benefits including:

The takbir would then be recommended these days; for people are more in need than ever, due to being overcome by enemies, of realizing that Allah is greater than everything. In His Power is the dominion of the heavens and earth. He is the Subduer of tyrants and the Subjugator of oppressors.

Making dhikr loudly in the masjid is from the permissible matters as long as it does not disturb worshippers or interfere with the Friday sermon. It is narrated from Ibn Abbas in Sahih al-Bukhari and Sahih Muslim:

‘In the lifetime of the Prophet, upon him be peace, it was the custom to celebrate Allah’s praises aloud after the compulsory congregational prayers.’ (al-Bukahri 12/802, Muslim 4/1211)

Majority of the scholars have permitted it and the need for making loud takbir, in these times, is great. We invite all people to engage in making the takbir after Friday prayers, in every masjid. There is none for us save Allah.

O our Lord! We have relied only upon You. To You we turn and to You is the return.