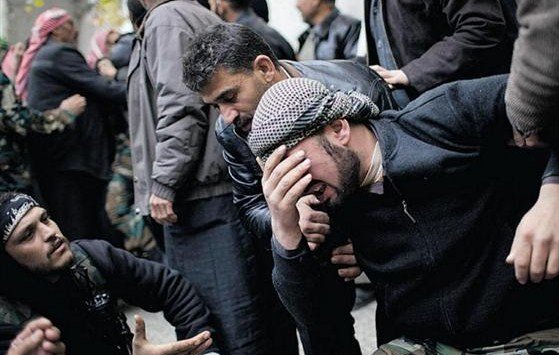 In a recent statement, the Syrian, shaykh Muhammad Al-Yaqoubi called Jordan and Turkey to an immediate military intervention in Syria to save the Syrian people and put an end to its suffering; and to help the Syrian people establishing the next government.

500 people were killed in cold blood mutilated and many burnt outside Damascus in Jdaydit Artooz. The troops of the Syrian regime besieged the town and gathered men and women and brought 100 prisoners and killed them and set fire to the bodies. Many of the victims are women and children and the rest are civilians who mostly fled from other areas.

Denouncing is not enough – the removal the regime without delay is an obligation and bringing all the people responsible for these massacres to justice.

Therefor, we call for in immediate military intervention of the neighbouring countries, mainly Jordan and Turkey.

We offer our condolences to our brothers and sisters in Syria. May Allah have mercy of the victims and may He grant patience to their families.